Theatre Royal Brighton is a historic Grade II listed theatre in Brighton, Sussex. The theater hosts musicals, plays, opera and ballet throughout the year, as well as Creative Learning events, workshops and courses. The venue has a capacity of 952 seats over four levels and features a wonderful Proscenium. 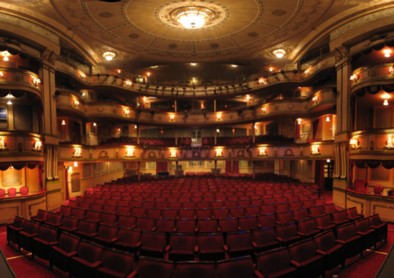 One of the oldest theatres in the country, Brighton’s Theatre Royal has a history that began over two hundreds years ago in 1806 when The Prince of Wales, George Augustus Frederick who later became Prince Regent and then King (George IV), approved the building of the theatre. It opened the following year on 27th June 1807. The opening performance for was Shakespeare’s Hamlet.

For it’s first fifty years the theatre struggled until it was bought and redeveloped by the actor Henry John Nye Chart in 1854. He hired the famous architect Charles James Phipps and soon the theatre became more financially successful and gained a respected reputation. When Henry died in 1876, his wife Ellen Elizabeth Nye Chart (also a thespian) took over and was one of the first female theatre managers. Ellen further built upon the success and reputation of the theatre.

In recent years the theater has hosted popular shows such as Priscilla Queen of the Desert, The Rocky Horror Show and Spamalot in order to appeal to a wider audience. The theatre was bought by the Ambassador Theatre Group in 1999 who have developed the infrastructure of the theatre, as well as investing in new productions and creating alliances with arts organizations.

Please note the following when attending the Theatre Royal Brighton:

You can find the address here, get contact details here and take a look at the seating plan here.

This website uses cookies to improve your experience while you navigate through the website. Out of these cookies, the cookies that are categorized as necessary are stored on your browser as they are essential for the working of basic functionalities of the website. We also use third-party cookies that help us analyze and understand how you use this website. These cookies will be stored in your browser only with your consent. You also have the option to opt-out of these cookies. But opting out of some of these cookies may have an effect on your browsing experience.
Necessary Always Enabled
Necessary cookies are absolutely essential for the website to function properly. This category only includes cookies that ensures basic functionalities and security features of the website. These cookies do not store any personal information.
Non-necessary
Any cookies that may not be particularly necessary for the website to function and is used specifically to collect user personal data via analytics, ads, other embedded contents are termed as non-necessary cookies.
SAVE & ACCEPT